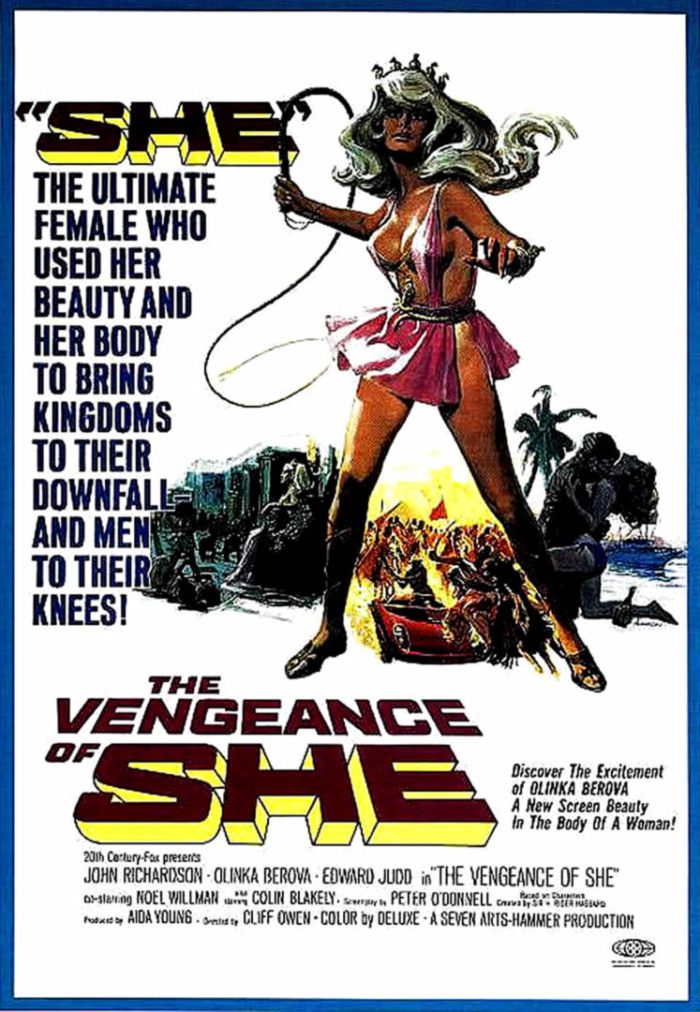 Three years after She was a hit for Hammer, the studio produced a sequel called The Vengeance of She.  It’s barely about Ayesha (“She Who Waits”) at all and there is no vengeance.  Instead, it’s about a beautiful young woman, Carol (Olga Schoberova), who may or may not be the reincarnation of Ayesha.  Killikrates (John Richardson) is the one who waits as one of his Magi, Men-Hari (Derek Godfrey), compels her to join him in the lost city of Kuma so she can walk through the blue fire to be reborn as his former love and live with him throughout eternity.

Basically, the roles are reversed here.  If you recall, in She, Leo Vincey (Richardson) was the reincarnation of Killikrates.  Ayesha (Ursula Andress) lured him to Kuma so he could walk through the blue fire to become immortal.  It backfired, though.  When Ayesha walked through the fire a second time, her immortality was reversed and she rapidly aged and died, leaving Vincey/Killikrates alone throughout eternity.  The twist here is that Carol is not really Ayesha.  Men-Hari uses her as a pawn so that he can somehow take a walk through the fire himself.  I don’t fully understand and I don’t remotely care.

Overall, it’s a bizarre treatment for a sequel and shares few of the same elements as its predecessor.  For example, it takes place 50 years after the original, in 1968 instead of 1918.  In and of itself, that’s not necessarily a problem; however, most of the movie is set in “modern times” and has none of the adventure of the first.  Part of the fun of She was watching Peter Cushing and crew hiking across the desert and facing its obstacles.  Stop right there.  Part of the fun of She was Peter Cushing, period.  He’s sorely missed in The Vengeance of She.

The movie opens with Carol walking down the road in a confused state.  She hitches a ride with a truck driver and, when he tries to make a move on her, he’s killed under mysterious circumstances.  She then walks into the water (the better for her underwear to become transparent) and stows away on a party boat.  The boat’s philandering owner, George (Colin Blakely) tells passenger Philip (Edward Judd), a psychiatrist, about this young lady with “considerable endowments.”  Philip becomes Carol’s guardian angel and escorts her on the journey toward finding herself, falling in love along the way.

There’s some humor among the character dynamics on the ship.  Thinking she is one of her husband’s women, Sheila (Jill Melford) tells Carol, “I don’t throw George’s girls to the sharks… anymore. There aren’t enough of them.”  After the boat reaches land, though, we don’t see the couple again.  Well, we’ll never see George again.  Earlier, when the ship changes course, Carol panics and jumps overboard.  George jumps in the water to save her and dies.  I suppose there’s some kind of poetic justice there somewhere.  Sheila is certainly not broken up over it.

The Vengeance of She is one of those mid-to-late 60’s movies with a theme song.  I tagged it with Shazam to see what it was called and if there was ever a single released.  The first match was simply “Opening Credits (The Vengeance of She)” by Mario Nascimbene.  However, when I tagged it again (I always do it twice; I’m anal that way), I got a match for “Who Is She?” by I Monster.  The British electronic music group apparently used a sample from the music for its 2003 song.  That’s all great, but what’s annoying in the movie is that every time Carol appears on screen, the same music clip plays.

When I begin losing interest in a movie like this, events happen for which I don’t understand the context.  One such event is when Men-Hari sacrifices a woman for some reason.  It’s a pretty cool scene.  He somehow shoots sparks at a rope holding a sword above a woman who’s strapped to a platform.  The rope breaks and the sword plummets, landing in the woman’s chest.  The sacrifice must have been necessary for Men-Hari to compel Carol because, in the next scene, the wind rises and Carol whispers, “I’m coming… I’m coming.”

When they arrive at Kuma, it looks different than it did in She.  I realized that continuity among Hammer’s franchise films is sometimes fuzzy, but it’s disappointing here because, instead of a giant stone statue of Ayesha straddling the entrance to Kuma, there’s only a giant gold bust of her head positioned above it.  Everything looks just a little cheaper and a little less extravagant.  I guess we could say that over the course of 50 years without a woman running the place, the lost city has gone to pot.  Or, we could say that the budget for the sequel was not as high as it was for the original.

You know, I can’t bring myself to call any of these less popular Hammer films “bad.”  I find one or two things in each one that I really like, so it’s not easy to simply write them off.  No, The Vengeance of She is not a great movie.  It’s not even good.  But parts of it can be quite enjoyable, even if the parts don’t add up to a coherent whole.  I don’t blame any single part of the creative team for its nonsense.  Yes, it’s a strange sequel and probably should not have been named as it is.  But I give limited credit to a movie that at least tries something different.