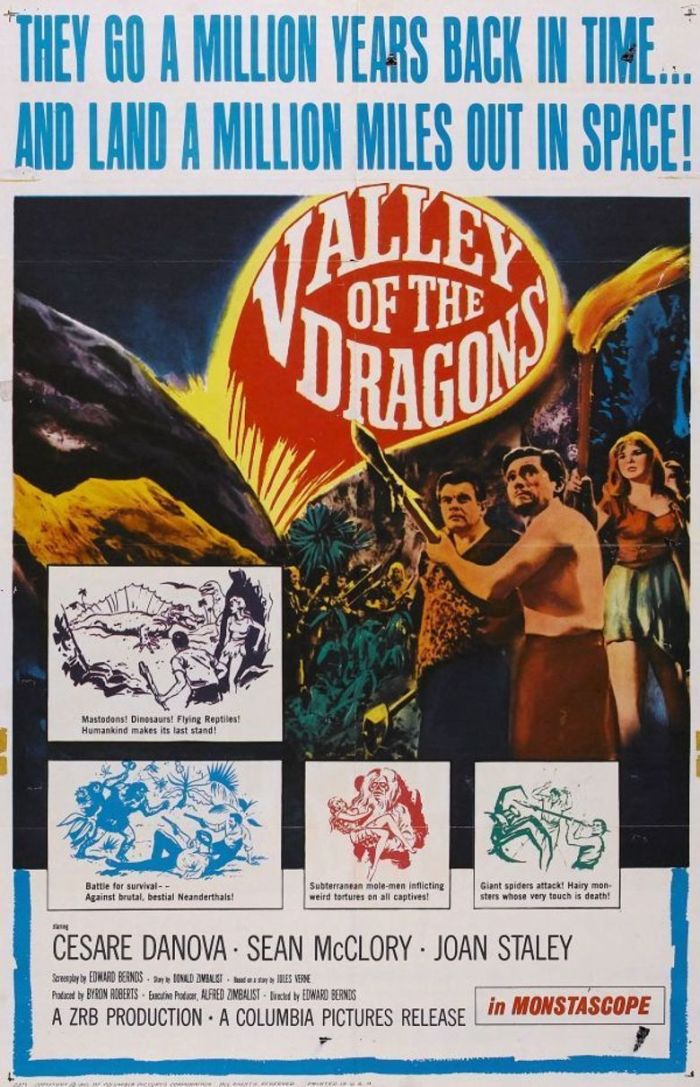 Derek M. Koch from Monster Kid Radio and Svengoolie must be in cahoots. Two days following an MKR episode about building two movies (Voyage to the Prehistoric Planet, 1965 and Voyage to the Planet of Prehistoric Women, 1968) around stock footage from another movie (Planeta bur, 1962), Svengoolie shows Valley of the Dragons (1961) This one actually did it first, inserting special effects scenes from One Million B.C. (1940), and others, into a newly filmed story.

Further, on MKR, one of the “Classic 5” questions Derek asked guest Stephen D. Sullivan was that if he could live inside a classic horror movie, which one would it be. That’s exactly what watching Valley of the Dragons is like. It’s as if the two main characters, Hector Servadac (Cesare Danova) and Michael Denning (Sean McClory), suddenly found themselves living inside the movie One Million B.C., and are watching its events unfold before their eyes.

The events aren’t exactly the same as they are in the original movie; however, there’s a distinct Back to the Future vibe as Servadac and Denning literally squat behind boulders watching scenes from One Million B.C. happen as they’ve already occurred. It gets really fascinating (and perhaps a little confusing) when they actually become the characters in the earlier movie to move the plot forward. If you watch carefully, you’ll see Lon Chaney Jr., Carole Landis and Victor Mature.

Even crazier than that is the fact that when the men exclaim, “I’ve never seen a creature like that,” they’re exactly right: it’s Rodan! Yes, Valley of the Dragons actually uses footage from Rodan (1956), not once, but twice. The “giant monster from the sky” guest stars in the role of… a pterodactyl? If you forget his first appearance briefly soaring above the two men, he reappears during the climax when a volcano erupts, burns down the forest and drives all the creatures out of it.

All of this aside, of which you may either approve or disapprove, the “new” story is loosely based on the Jules Verne novel, “Career of a Comet.” Here, when a comet hits Earth at exactly the same time Servadac and Denning take ten steps to begin a gun duel, they are transported back in time “100,000 years” to a prehistoric era. They quickly determine that the same comet that hit Earth back then and took a piece with it, along with its atmosphere, has now taken them with it.

“There’s only one explanation,” one of them surmises. Really? Talk about jumping to conclusions! I’d have preferred an alternative scenario in which creatures like alligators with fins glued on their backs, mastodons that look like armadillos, and iguanas substitute for dinosaurs are explained as alien or not of this earth. If the science is head scratching, don’t even acknowledge the ending when they say that they’ll be returned to Earth in only seven years.

There is a solid story thread running throughout Valley of the Dragons, although it’s more than a little heavy handed. The duel the two men were supposed to have is never forgotten. “Under the circumstances,” it’s temporarily postponed. Then, when one saves the other’s life, they “can’t possible duel now.” Ultimately, it’s a metaphor for two competing tribes. If Servadac and Denning can forgive each other and work together, so can they. Awwww…

None of this has any business working, but it does, simply as good, silly fun. Rather than recommend it on its own, though, you really should watch One Million B.C. as well. Then, imagine that unknown to those characters, two men from the future are lurking in the jungle and watching from behind boulders. And, if you just can’t wrap your head around it, do like the earth does when hit by a comet. How did it survive, you may ask? Valley of the Dragons explains simply, “It rolled with the blow.”