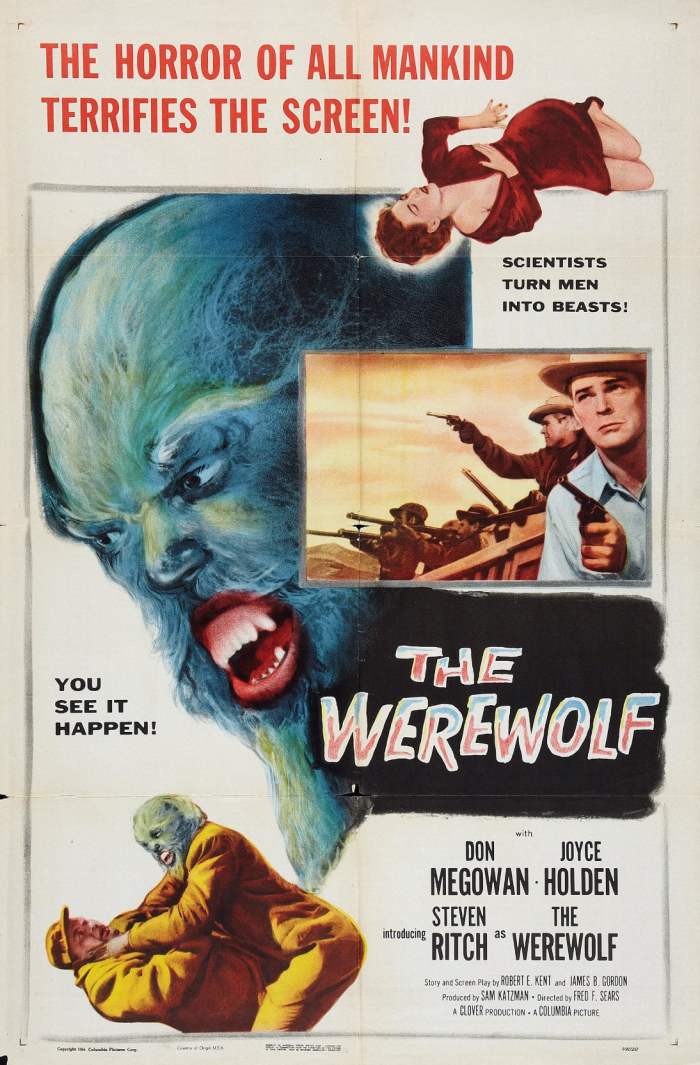 In The Encyclopedia of Science Fiction Movies (Woodbury Press, 1984), Phil Hardy bestows great historical significance upon The Werewolf (1956), a seemingly insignificant movie. “…in the development of the Science Fiction and horror genres. It marks precisely the point at which horror, which had been a dormant genre in the early fifties, began to take over from Science Fiction.”

He continues, “This trend was confirmed within a year when, in the wake of the sale of the Universal Frankenstein films to American TV and the success of British Hammer’s romantic/gothic versions of Dracula (1957) and Frankenstein… producers started actively looking for horror rather than Science Fiction stories to film.”

If this is true, and I have no reason to doubt Mr. Hardy, it’s interesting that The Werewolf was initially released on the bottom half of a double bill with Earth vs. the Flying Saucers, sort of ushering out the old and ushering in the new. Indeed, a year later in 1957, two other werewolf films were released: Daughter of Dr. Jekyll and I Was a Teenage Werewolf.

The word “lycanthropy” is defined as a human being having the power of becoming a wolf, or of having the power of turning another human into a wolf. Some say lycanthropy stems from nothing but myth and superstition, yet the belief that a human can turn into a wolf has persisted since the dark ages to this very day. It is a universal belief. The ancient Romans and Greeks wrote of the phenomenon. There are tales of such happenings in Borneo, Turkey, South America… everywhere. The American Navajo Indians and other tribes tell stories about wolf men. The legends have persisted from the beginnings of man’s memory of time. Why? Why haven’t these tales died… the tales that say wolf men roam the earth…

With opening narration like this (read by actor-turned-director Fred F. Sears), there’s no suggestion that Duncan Marsh (Steven Ritch) will become a werewolf due to anything other than supernatural causes. When he stumbles into the village of Mountaincrest with no memory, there’s no mystery for us that he’s a monster; however, the movie wants to create a mystery about the monster’s origin.

I like that approach to the story, although the fact that Marsh has become a werewolf because a mad scientist is trying to create an immunization to survive radioactive fallout, doesn’t quite perpetuate a world wide legend. As with many movies of the like, the pseudo-scientific explanation is soon forgotten so the story can unfold with nothing but the resulting drama.

In that regard, I really like the narrative dynamics of The Werewolf. Writers Robert E. Kent and James B. Gordon, not normally known for genre work, create a compelling scenario. Not only is his condition a mystery to Marsh, but the overarching dilemma of saving an innocent man vs. destroying a dangerous monster is effective.

Amy Standish (Joyce Holden), whose uncle, Dr. Jonas Gilcrist (Ken Christy) is the town doctor, meets Marsh and realizes he’s a sick man. At the same time, Sheriff Jack Haines (Don Megowan) discovers dead bodies and realizes a monster is on the loose. How the two sides of the issue struggle to reconcile is best explained by a quote from Haines, “Doctors try to save people. The law doesn’t always have a choice.” 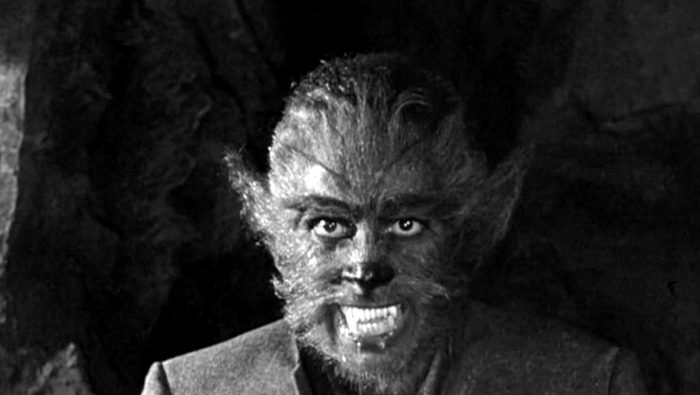 So far, so good, but about three-quarters of the way through its 79-minute running time, I became restless. The movie begins dragging and the execution is just not quite as good as the concept. If not for a few interesting camera shots here and there, I may have completely lost interest. For example, when Marsh is temporarily jailed, the camera shoots from below and long shadows of the bars reach to the top of the screen.

Regardless of how the monster was created, we ultimately witness the familiar tropes of a still young sub-genre of werewolf movie. Marsh is nearly as tortured as Larry Talbot (Lon Chaney Jr.) in The Wolf Man (1941), although it’s because he doesn’t know what’s happening to him, whereas Talbot knows exactly what’s happening to him. And, the story concludes with an angry, torch-bearing mob.

One of my favorite werewolf “looks” is Andreas Obry’s (Matt Willis) in The Return of the Vampire (1943). That means I’m also fond of Ritch’s, because it’s the same! Uncredited makeup artist Clay Campbell created both for Columbia Pictures. The Werewolf uses standard transformation techniques, but doesn’t quite keep the actor in the same position for the effect to be as seamless as it could have been.

So, it seems that prolific low budget producer Sam Katzman unintentionally earns his status as an “icon of horror” with The Werewolf. You may have thought it was because of movies that are perhaps more familiar, like Creature with the Atom Brain (1955) or The Giant Claw (1957). Nope, he’s responsible for more than just one of the goofiest, yet most lovable, flying creatures in motion picture history.