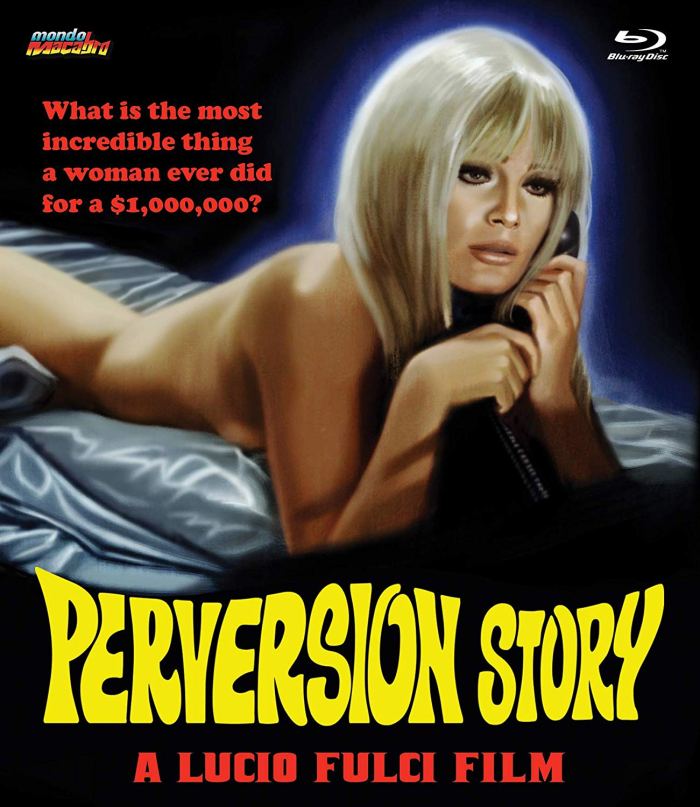 With a title like Perversion Story (1969), I’d expect a story that’s… well… more perverse.  Since Euro Horror, gialli and poliziotteschi are often found under different names, I thought perhaps this particular movie was given a more sensational moniker for its marketing campaign.  I’m not sure the original name is better, though:  Una sull’altra (One on Top of the Other).  In either case, the titles, as well as the two versions of cover art for the Mondo Macabro Blu-ray release, are misleading.  Not much sexier, if any, than other Italian features of this time, I didn’t anticipate how impactful I’d find Perversion Story to be.

In one of the disc’s bonus features, author Stephen Thrower (Beyond Terror: The Films of Lucio Fulci) concurs about the movie’s poster art and says it goes against the grain of the film.  At first glance, you might assume the man holding a gun while a naked woman kneels in front of his crotch with her hands on his pants zipper is in control of the situation, forcing her to do something against her will.  Nothing could be further than the truth.  In the actual movie, Dr. George Dumurrier (Jean Sorel) is portrayed as passive instead of active.  With little control over his own life, he’s the victim.

Barely knowing what hit him, George is accused of murdering his wife, Susan (Marisa Mell), to collect from a healthy life insurance policy.  Although we never necessarily see him behaving badly, his brother, Henry (Alberto de Mendoza), and sister-in-law, Martha (Faith Domergue), provide very little in the way of character testimony when he’s arrested, convicted and placed on death row.  His only emotional support comes from Jane (Elsa Martinelli), the woman with whom he’s having an affair.  Well, I guess that makes George a bad guy, at least in terms of the movie; but, I’m not sure it’s a crime worth the punishment.

One of the first of many twists and turns in Perversion Story comes earlier, when George gets a phone call with instructions to go to a strip club.  When he and Jane arrive, they meet dancer Monica Weston (also Marisa Mell), who is the spitting image of his dead wife, except that she has green eyes and blonde hair.  (Susan was a brown-eyed brunette.)  George figures one way he can determine if it’s really Susan back from the dead is to sleep with her, which he easily arranges.  Jane, who goes back and forth about ending their relationship, anyway, seems to find this a perfectly legitimate reason for him to cheat on her.

That’s just the beginning of a compelling tale of deception and murder, stylishly directed by Lucio Fulci.  Watch for his placement of characters within his shots, some situated in the foreground while others are situated in the background.  Mirrors are a key element in many shots, representing the dual identities of the story.  In one of the most interesting shots, George and Jane make love while the camera seems to lurk impossibly inside the bed, the action depicted through red, gauzy sheets.  Fulci even demonstrates an early example of multiple split-screen, years before Dario Argento (or Brian De Palma). 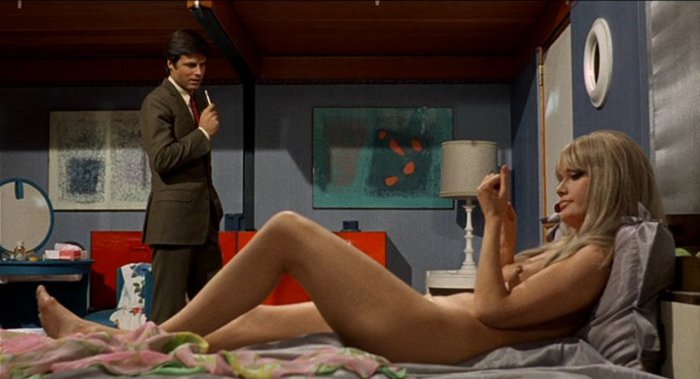 The action takes place in San Francisco and Perversion Story was apparently the first movie Fulci filmed outside his home country.  I imagine in the late 60’s the extended scenes of the locale would have made a nice travelogue, especially for audiences in Italy.  However, watching the movie today, I couldn’t help but question the inclusion of Lombard Street, often called the most crooked street in the world.  I find it hard to believe residents wouldn’t avoid a tourist trap like that every chance they got.  Likewise, extended footage of driving along the countryside makes a pretty picture, but probably isn’t logistically correct.

As for its “perversion,” the movie does have nudity, but it’s mostly within tasteful limits dictated by the settings.  For example, at the strip club, you’ll see “nudes on a swing,” and you’ll have obligatory scenes of Mell and Martinelli in the buff.  Neither are gratuitous; they’re integral to the story.  They also take a back seat to that story.  There’s enough mystery and intrigue to ponder so you’re not left to focus on the skin.  Thrower calls Perversion Story a giallo, but it has none of the tropes you’d expect, including leather-gloved killers and grisly deaths.  He claims it’s a giallo because of the “rich people have to suffer” theme of the plot.

There’s no commentary track on the Blu-ray; however, Thrower’s 40-minute “interview” is an excellent substitute.  He elaborates on Fulci’s “daring and unusual technique” in more detail than I have here, explaining the movie’s significance in relation to the director’s later gialli, A Lizard in Women’s Skin and Don’t Torture a Duckling.  He also mentions how the score by the great Riz Ortolani “adds elements of stress and pressure.”  All in all, Perversion Story is a package worth unwrapping.  The only real perversion would be for you to avoid it because you think it’s something other than it really is.