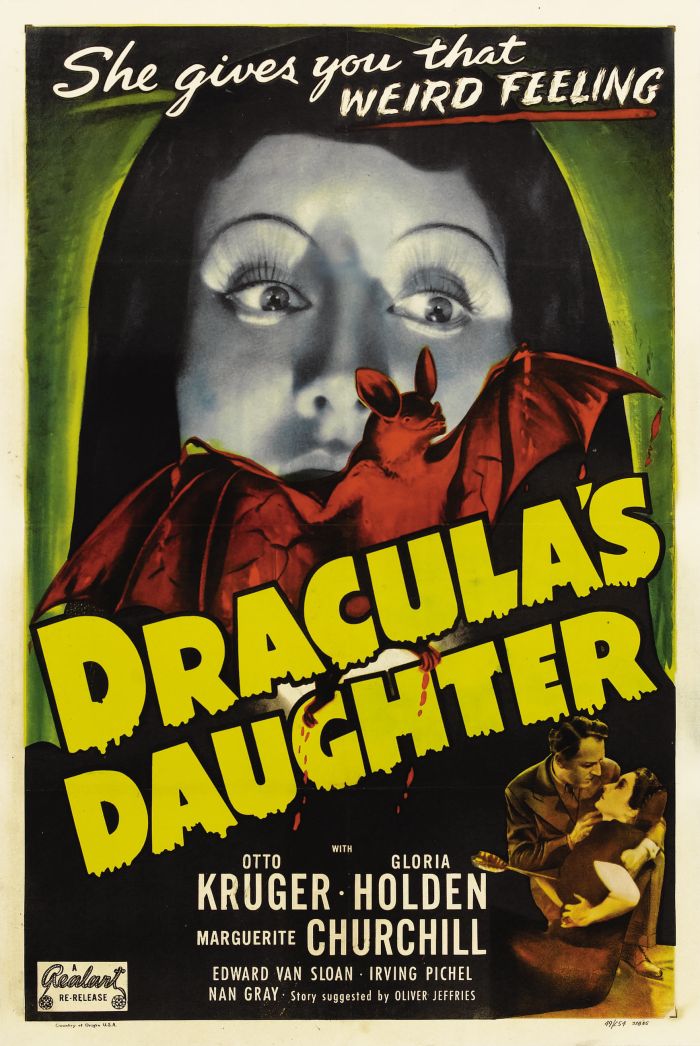 One thing I love about the Universal Monsters sequels is the attention paid to continuity between them. Both Bride of Frankenstein and Dracula’s Daughter begin where Frankenstein and Dracula ended.  Yeah, there might be a bit of revisionist history in the second chapters, but it’s mostly disguised with adjacent scenes we just didn’t see the first time around.  For example, at the same time Van Helsing is staking Dracula in the original movie, police are racing down the castle steps; we just don’t see this occurring until the sequel.

In Dracula’s Daughter (1936), the police presence, specifically that of Scotland Yard, is felt so heavily that at times it’s more criminal mystery than horror thriller. Sir Basil Humphrey (Gilbert Emery) basically replaces the role of disbelieving family members that were featured in Dracula.  This depersonalizes the stakes (pun intended), even though the movie attempts to add a love triangle among a former student of Van Helsing’s, Jeffrey Garth (Otto Kruger), his assistant, Janet (Marguerite Churchill) and the villain, Contessa Marya Zeleska (Gloria Holden), aka “Dracula’s Daughter.”

Zeleska is not literally Dracula’s daughter. Figuratively, she became his daughter when she suffered “the curse of the Draculas,” which I assume means became his blood slave.  She may be the first reluctant vampire character in movies in that she wants to be “free… free forever.”  However, a burial ceremony to destroy her master’s body does not actually release her.  She continues to be interested in alternative cures that Garth offers, such as hypnosis.  But it seems mostly lip service as she continues to carry on her “father’s” wicked ways.

The genders are reversed, but Zeleska’s goal is the same: to have a partner with whom she can spend eternal life. At her side is a creepy looking guy named Sandor (Irving Pichel), who could be interpreted as the real villain of the story.  You get the feeling that even if Zeleska could escape the darkness, Sandor would try to prevent it… or kill her instead.

The locales are also reversed. Dracula begins in Transylvania and moves to London.  Dracula’s Daughter begins in London and moves to Transylvania.  Instead of literally carrying her victim with her for the climax, Zeleska takes Janet.  Her victim, Garth, chases after them.  It then becomes somewhat of a hostage situation where one life is offered for another.

How much you enjoy Dracula’s Daughter may depend upon how much you like Holden in the role. Personally, I don’t think she’s as charismatic as Bela Lugosi was as Dracula.  Soft spoken with a deep voice, her high cheekbones make her resemble Cher.  She uses her ring to mesmerize her victims, but it’s her voice alone that almost lulled me into a trance.  It would be best to distance her relationship with Dracula, but when she gives her interpretation of lines like, “I never drink… wine,” you’re reminded this is an inferior product.

There’s the basis for a great idea here. Before Garth understands the true reason for Zeleska’s torture, he likens her “obsession” to that of an alcoholic and proposes a method to make her similarly fight her will.  You’d place an alcoholic in a room with a bottle and not allow him/her to drink, but I’m not sure what Garth would put in a room with Zeleska, a blood bag?  The movie, rightfully so, is more interested in the action and soon abandons his practical efforts in favor of Zeleska’s failures to go straight.

Van Helsing’s lack of participation in it all is curious. His primary purpose is, for us, to state the obvious, and for the other characters, to recap events from the first movie.  His commentary with Sir Basil and relationship with Garth is a bridge to what’s really happening, but his actual participation in events is limited.  When Garth charters a plane to Transylvania, Van Helsing exclaims, “Stop him!  He’s going to his death!”  Even when he joins at the end, it’s only to respond to a comment about how beautiful Zeleska’s body is.

“She was beautiful when she died… 100 years ago,” says Van Helsing. Probably intended to be serious, I laughed when he said that.  Likewise, at the beginning of the movie when someone asks how long Dracula has been dead, I laughed when Van Helsing said, “About 500 years.”  Intentional or not, there’s more humor in Dracula’s Daughter than in its predecessor.  But there’s less style.  The sequel has none of the atmosphere of the original, and it’s particularly noticeable in what are supposed to be the exact same settings, such as Dracula’s Transylvania castle.

Compared to the other sequel, Bride of Frankenstein, Dracula’s Daughter… well, doesn’t compare. The time between making the two Frankenstein movies was shorter than that between the two Dracula movies, so maybe that has something to do with the approach taken.  Dracula’s Daughter seems to have established the pattern for the multitude of Universal Monsters sequels that followed.  I don’t know that any of them could be considered good movies, but a lot of them are fun.  However, this one is not one of my favorites.