It’s not shameful to say you’ve never seen all the movies of your favorite actor. At least, that’s what I’ll claim when I admit I recently watched The Mad Magician (1954) for the first time. I mean, if you’ve seen them all, what do you have to anticipate? You’d never get to experience the joy of seeing, for example, a “new” Vincent Price movie. I’ll take my sweet time getting to the few others that remain.

The Mad Magician feels “retro” even for 1954. In many ways, it recalls movies 20 years its senior. One reason is that Price looks so young. Clean-shaven with hair pulled forward instead of combed back, he gives a subdued performance that I’d swear was pre-House of Wax instead of one year after. In most scenes, he stands quietly and allows his co-stars to rant and rave.

When the time comes, though, his character, aspiring magician Don Gallico/”Gallico the Great,” explodes with pent-up rage and reclaims the limelight. I say “aspiring” magician because Gallico is really just a designer/builder of illusions for other performers. Denied the opportunity to take the stage by his employer, Ross Ormond (Donald Randolph), as well as ownership of his creations, resentment grows. 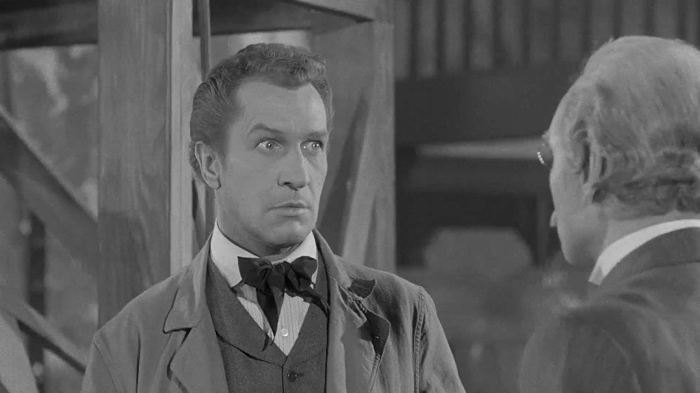 Gallico would probably let his feelings fester if not for the fact that Ormond and master magician, “The Great Renaldi” (John Emery), are so mean to him. They can’t just crush his dreams; they must also pour salt in his wounds. Therefore, from time to time, Gallico snaps and disposes of his “enemies” in creative ways using the equipment from his illusions.

Coincidentally, Gallico is also a master of disguise, using state of the art (for the time in which the movie takes place) masks to masquerade as the men he kills, therefore eliminating suspicion that they are even missing. It’s a clever ruse, especially when police finally catch of whiff of wrongdoing and discover that the fingerprints of Ormond and Rinaldi match.

This causes them to believe that Ormond and Rinaldi are the same person without even considering that both of them are also Don Gallico. Enter mystery writer Alice Prentiss (Lenita Lane). Inspired by events, she lets her imagination run wild while writing a new book and solves a case that the authorities can’t. It’s another retro vibe, harkening back to Glenda Farrell in Mystery of the Wax Museum (1933).

The Mad Magician concludes with a fun, old-fashioned set piece. Strapped to a conveyor belt slowly rolling him into a 3,500-degree oven (an illusion called “The Cremator”), Lt. Alan Bruce (Patrick O’Neal is his very first big-screen appearance) struggles to free himself while Don Gallico both taunts him and explains every detail of his impending doom. It may as well be a railroad track with an oncoming train.

I like Don Gallico’s attitude by this point. Admitting he’ll probably be apprehended, he exclaims, “They’ll give me the same voltage for killing four as for killing three!” What’s another casualty for him? Ultimately, I can’t say this is one of my favorite Vincent Price movies, but I’m sure glad I saw it before I met my own untimely death. Hmmm, I guess that’s one reason I shouldn’t wait too long to see his others…