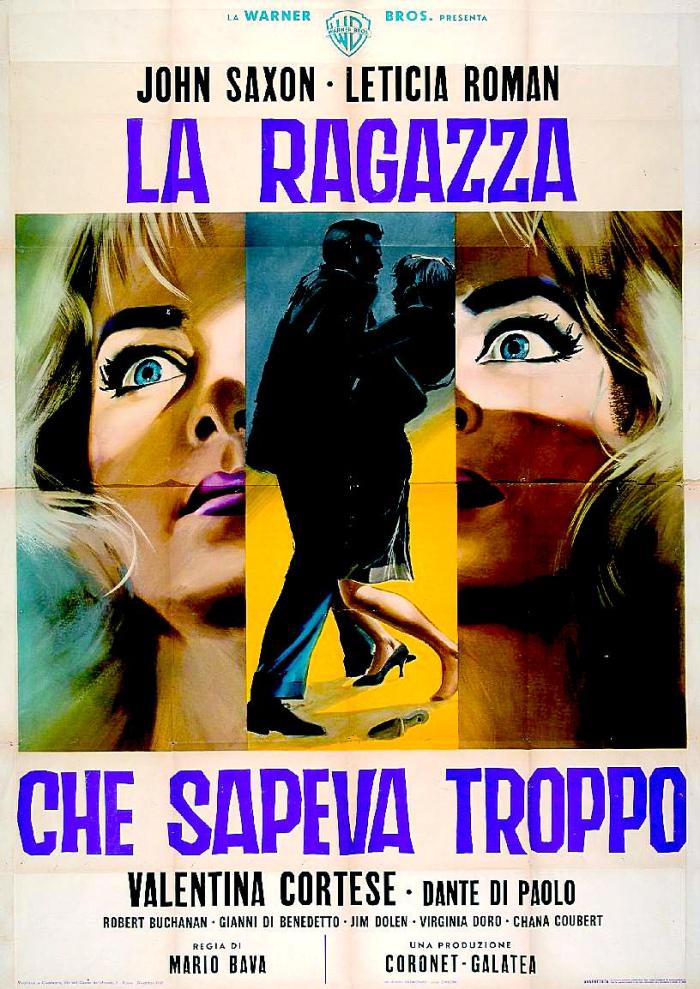 How significant should we consider Mario Bava’s The Girl Who Knew Too Much (1963) to be? It is the first and the last of something in Italian cinema… It is regarded as the first giallo film and it is the last film Bava shot in black and white. Other than that, though, it plays like one of William Castle’s thrillers that were so popular at the time. Well, that is to say AIP’s edited version, Evil Eye, which I watched on Shudder, played like that. The original version, which I watched on Anchor Bay’s Mario Bava Collection – Volume 1, is more unique than that.

It’s not that there are significant plot points that differ between the two movies. However, the subtle changes made by trimming a scene here and there have a huge impact on the tone of the story. For example, in The Girl Who Knew Too Much, marijuana cigarettes are a plot point that remains important from the beginning of the movie to the end. Any reference to them is removed in Evil Eye, which results in the movie having a completely different ending. Therefore, the former feels less stitched together than the latter.

More than by trimming visual scenes, changes between the two movies are made through manipulation of the audio. Evil Eye is dubbed. It doesn’t matter what the characters are speaking. Unless you read lips (and Italian), the dialogue could be completely different than the words applied over it. The Girl Who Knew Too Much is subtitled. I wouldn’t notice a difference in what’s spoken and written, but I bet there are people who would. You have to assume it better reflects the director’s intentions.

The first major difference I noticed was on the flight that our heroine, Nora Davis (Leticia Roman), takes from the United States to Italy. In Evil Eye, you hear humorous thoughts of the passengers on the plane. It’s a one-and-done gimmick. In The Girl Who Knew Too Much, there’s omniscient narration that’s used consistently throughout the movie. Although both approaches use humor, this is one way that Evil Eye incorporates an overall lighter tone. The important point is the same in both: Nora is obsessed with reading murder mysteries.

This fact plays heavily into her motivations. It means she may perhaps be too eager to believe she’s witnessed a murder after she’s mugged on the streets of Rome and wakes up groggily in the rain. On the other hand, it means she knows how to set elaborate traps to protect her when she’s convinced she will become the next victim. More importantly to the plot, it means the authorities are less likely to believe events are real instead of manufactured by an overactive imagination fueled by the novels she reads.

Rather than cutting scenes from The Girl Who Knew Too Much, it seems that scenes were added to Evil Eye. Two involve Nora and a bus. In the first, near the beginning of the movie, we see Nora at the airport running for a bus in the rain after all the taxis are taken from her. In the second, later in the movie, we see Nora board a bus, on which a man makes a pass at her. In The Girl Who Knew Too Much, we see Nora inside the airport and then the scene jumps to her knocking on the door of her ailing, elderly aunt.

Likewise, there’s a scene in The Girl Who Knew Too Much that ends abruptly, yet is extended in Evil Eye. During the course of her investigation into the murder she witnessed, Nora falls in love with her aunt’s doctor, Marcello Bassi (John Saxon). The two have a relaxing moment on the beach, after which Marcello, who’s treated as a bit of a red herring, passionately kisses her. In Evil Eye, they roll into the surf a la From Here to Eternity. In The Girl Who Knew Too Much, there’s a quick cut to the couple kissing on her doorstep after he’s taken her home.

Although neither movie contains any gore, they both have characteristics of a giallo. For one, the killer is not revealed until the end and the identity is not someone whom you’ve been led to believe it might be. For another, although we don’t necessarily directly witness the incompetence of the police, we hear about it from Andrea Landini (Dante DiPaolo), a reporter who played a big part in the investigation of a series of murders several years ago. Three women were killed in alphabetical order of their last names. (Nora’s last name begins with…)

It’s always fun for me to compare two movies like this. In this case, the exercise should convince you that the only way to watch this one is in its original version, The Girl Who Knew Too Much. It’s more coherent and competent than the Americanized version, Evil Eye. On its own, though, the former is not necessarily required viewing. It’s Bava-lite, using the director’s trademark cinematography, but significant mostly as an early example of a subgenre rather than one at it’s peak of creativity and popularity.

Part of the Countdown to Halloween.  Tomorrow… more Italy!