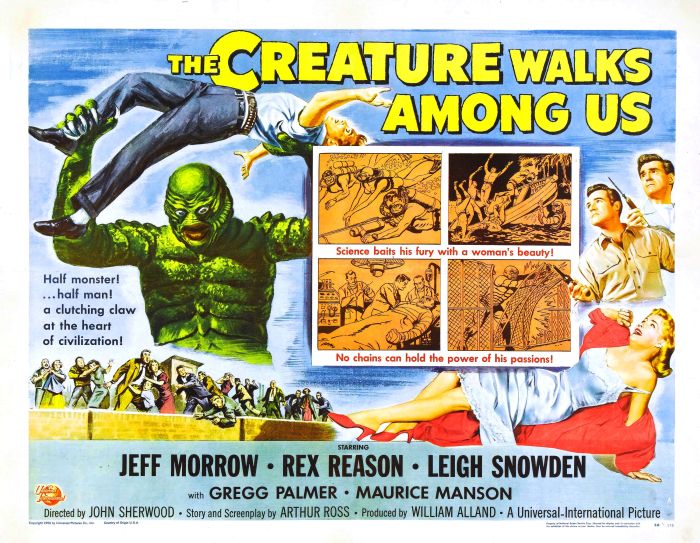 For what I would consider to be the final Universal Monsters movie, The Creature Walks Among Us (1956) seems fairly ambitious. It’s not just the tale of a monster run amok.  In fact, the Gill-man isn’t the real monster at all.  He’s the victim of a mentally unhinged doctor who abuses his wife.  Don’t worry if that’s not how you interpret it; it’s how the other characters do.  They’ll state that for you at the end of the movie so you don’t have to draw your own conclusions.

Speaking of being a little talky, that’s something the last of the Universal Monster movies all have in common. As they leaned more towards science fiction, they attempted explaining in detail the science part of the fiction.  Here, it’s something fairly simple: sonar.  The men on the expedition to retrieve the Gill-man from the Everglades can’t just use it to locate him without explaining to us how sound bounces off an underwater object and the amount of time it takes to return tells how far away it is.

In the 1950s, maybe sonar wasn’t commonly understood and The Creature Walks Among Us had to actually educate the audience. On the other hand, it plays loose and free with the more fictional science.  Today, it’s fairly comical to believe that simply transfusing the Gill-man with human blood would actually change his DNA.  That’s what they do in an attempt to resume his evolution from amphibian to human.

Dr. William Barton (Jeff Morrow) is the aforementioned doctor. He believes, among other things, that if he can change the metabolism of man, man will change.  This is for the greater good, right?  No, it’s so he can drink and drive.  Ultimately, they change only the skin of the Gill-man, not the animal inside.  This opens discussion about nature vs. nurture.  “What brings out the best in human kind and what brings out the worst, because it’s the stars or the jungle.”  Huh?

By the time doctors Morgan (Rex Reason), Borg (Maurice Manson) and Johnson (James Rawley) realize Barton’s a kook, he’s pushing his wife, Marcia (Leigh Snowden), around like he hates her, yet bullying the man, Jed Grant (Gregg Palmer), he thinks is fooling around with her. It turns out Grant really is coming on to her.  He says he just wants to be friends, but she replies, “Being a friend of yours isn’t going to solve my problems, can’t you understand that?”

It’s enough drama to drive the Gill-man into a rage, presumably to protect Marcia. He really wants to jump back in the water and swim away, but since he’s lost his gills and developed lungs, he would only drown.  It’s a sad situation for him, spending the final part of the movie in a pen with the other animals.  They try to civilize him by putting clothes on him, but it doesn’t really work.  When he gets mad, walls start crumbling down and furniture starts flying.

With all this excitement happening, The Creature Walks Among Us still plays incredibly slow. They spend much too long hunting and capturing the Gill-man during the first third of the movie.  In the second third, he’s wrapped in bandages while he recovers from third degree burns he received as part of being captured.  In the final third, he’s in his pen observing the soap opera unfolding around him until he can’t take it anymore, but then there’s only six minutes of the movie left for him to rampage.

I’ll bet you can guess that even with its flaws, I enjoyed The Creature Walks Among Us. It’s a fitting conclusion to the Universal Monsters legacy, featuring an original creation the caliber of Dracula, Frankenstein, the Mummy and the Wolf Man.  It has a structure similar to some of the earliest horror movies, yet takes a step forward toward the later science fiction movies.  Plus, it’s a sequel, something it has in common with 17 other Universal Monsters movies.

One thought on “Universal Monsters: The Creature Walks Among Us (1956)”