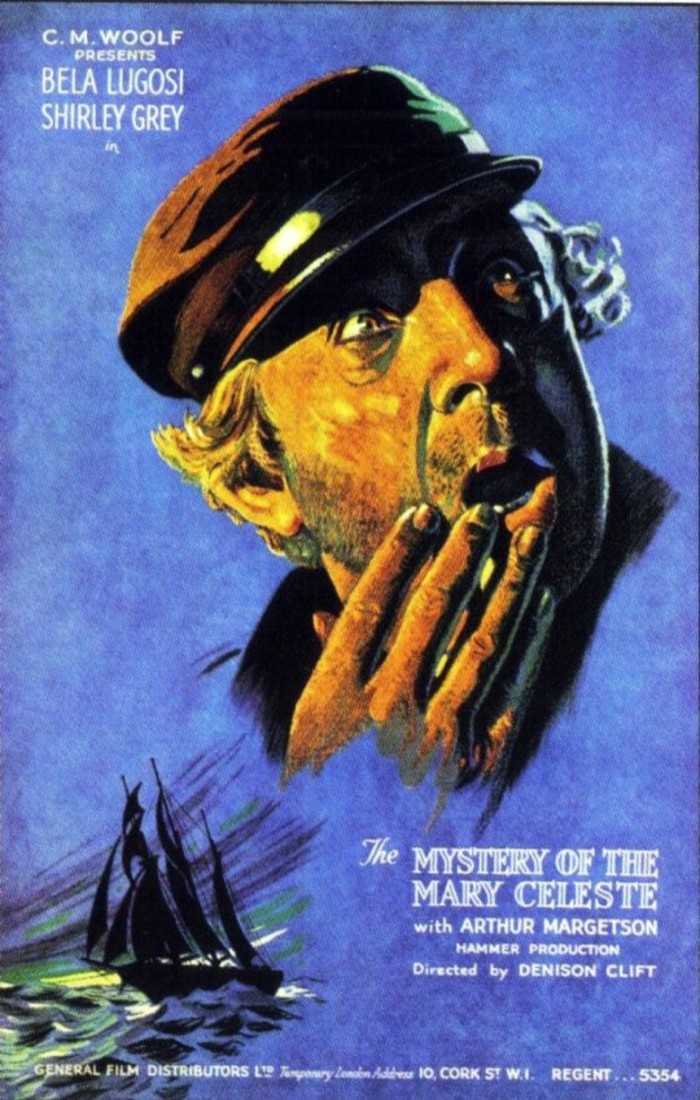 On December 5, 1872, an American merchant ship named “Mary Celeste” was discovered adrift and deserted in the Atlantic Ocean, off the shore of the Azores Islands.  The last entry in her log was dated ten days earlier.  She had left New York City for Genoa almost a month earlier; however, none of those on board the ship were ever seen or heard from again.  This true story sounds perfect for fictional adaptation.  Indeed, none other than Sir Arthur Conan Doyle wrote a first-person account by a supposed survivor that was anonymously published in 1884 as “J. Habakuk Jephson’s Statement.”

Fifty-one years later, Hammer Films (in its original incarnation) produced a motion picture version called The Mystery of the Mary Celeste, which was released in the United States as Phantom Ship, starring Bela Lugosi.  Filmed in England between The Raven (1935) and The Invisible Ray (1936), the movie offered one possibility regarding the fate of Cpt. Benjamin Briggs (Arthur Margetson), his wife, Sarah (Shirley Grey) and the men who had to be “shanghaied” in order to create a crew for the voyage.  A superimposed text introduction calls it “one of the strangest and most dramatic chapters in maritime history.”  Does the movie effectively represent this claim?

Would it be cheating if I said I didn’t know?  Available in the public domain, I watched a very choppy version on YouTube; it was the best I could find.  Besides the physical quality, 18 minutes were cut from the original British running time.  Because of this, it moves along at a quick pace; however, there isn’t much time to build suspense as, one by one, the crew members are eliminated by a mysterious killer.  More time is spent setting up the voyage, explaining Briggs’s backstory and manufacturing a reason for Sarah to be on board.

A byproduct of this exposition would be generating a suspect in the form of Cpt. Jim Morehead (Clifford McLaglen), an old friend of Briggs who provides the third side of a love triangle.  When Briggs steals Sarah from him, Briggs is eager to remain friends; however, Morehead never wants to see them again.  Sarah feels terrible about the situation, but clueless Ben asks, “Why?”  Does Morehead send one of his crew to assist the Mary Celeste so he can sabotage it, or does he stowaway himself to terrorize the crew?  I said, “A byproduct… would be.”  Ultimately, it’s all a red herring of my own creation.

As the numbers drop, there’s an interesting pre-The Thing plot point where the remaining three men realize that, as First Mate Toby Bilson (Edmund Willard) says, “When another goes, I’ll know who the killer is.”  That’s true, by process of elimination, if Bilson is innocent, the killer will automatically be identified.  I’ll try not to spoil it, but I must say that Lugosi’s Anton Lorenzen is one of the three who remains standing.  His performance is the one reason I recommend Phantom Ship.

Playing against type, Lugosi, in his cockeyed cap, looks older, partially gray, tired, disheveled and unshaven. He plays an emotionally troubled drunk who returns to New York after a six-year absence and is offered a position on the Mary Celeste as a favor.  He’s a kind old man who befriends Sarah once on board.  The actor borders on scenery-chewing; however, gives a truly emotional performance, his face more expressive than I’ve ever seen it.

So far, we haven’t seen anyone actually get killed.  Instead, those surviving prior to their own deaths find abandoned hats and accordions.  It’s all very dry and matter of fact.  That is, until the finale, when the killer is revealed and actually shoots the last man standing, throwing him overboard into the jaws of a circling shark.  That’s not a spoiler; remember, we read at the beginning of Phantom Ship that the brig was found “drifting and derelict.”  That means nobody was on it.

Ah, but what about the killer?  His exit is part cop-out, part reflection of his mental state.  It doesn’t really lessen what comes before, which isn’t a whole lot to start with.  I’d love to see a restored version of The Mystery of the Mary Celeste, but I don’t believe the original exists.  Instead, Phantom Ship survives as just a hint of what would come when Hammer Films went off hiatus 12 years later, but also, more importantly, a record of the unique talent of Lugosi and a reminder of what could have been.