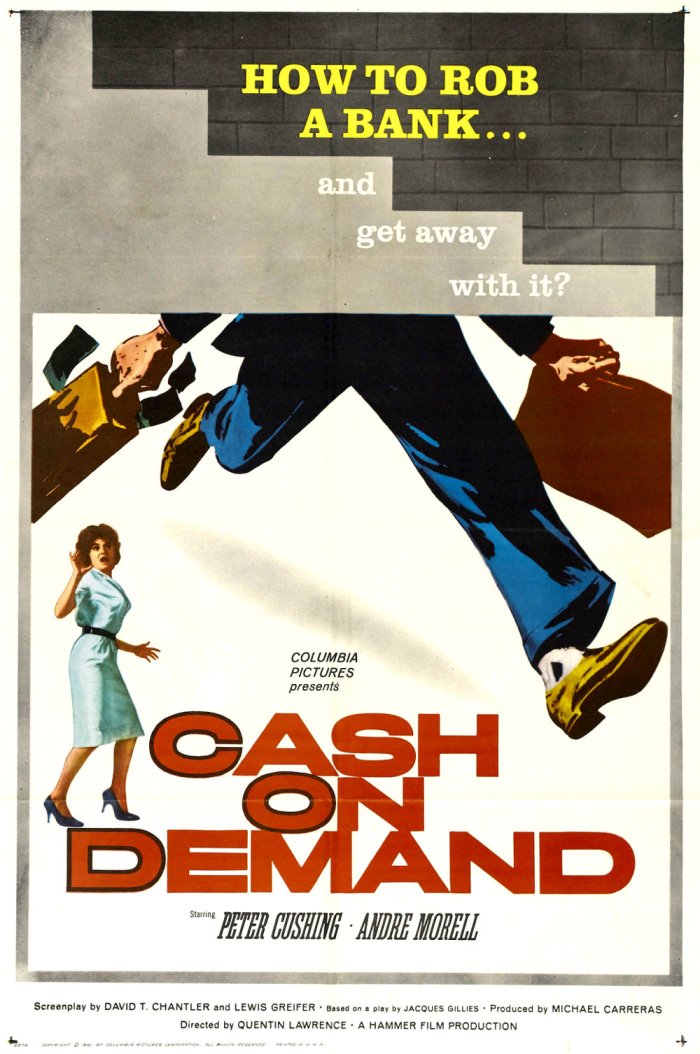 On December 23, the employees of the Haversham branch of the City & Colonial Bank come to work as they would on any other day.  They exchange social greetings before their manager, Harry Fordyce (Peter Cushing), arrives and they must exhibit strictly professional behavior.  In only a few minutes, as Fordyce gives the bank lobby a white glove inspection and nearly fires someone for a bad pen at the customer counter, we learn all we need to know about the fastidious man and why the events that transpire later that morning are so devastating to him.

Mid-morning, a man named Colonel Gore-Hepburn (Andre Morell) enters the bank and asks to see Fordyce.  He isn’t on the day’s schedule, but when he says he’s from the home office of Mercantile Bank Insurance and he’s there for a surprise inspection, plans change.  Plans change again when he reveals he’s only impersonating the investigator and he’s there to rob the bank.  Fordyce balks when he brings a gun from his coat pocket.  “How do you know what a gunman looks like these days?” Gore-Hepburn asks.  Then the phone rings.  It’s Fordyce’s panicked wife who tells him, “Do whatever he says, I beseech you!”

This is a robbery Gore-Hepburn says he’s been planning for a year, and he has learned a lot about the bank’s operations and staff.  He uses his knowledge of Fordyce to push all his buttons, and some of the most delicious scenes are between the two men.  At one early point, Fordyce tells him, “The opinion of a common thief is of no interest to me.”  Gore-Hepburn replies, “I’m only trying to show you the error of your ways.”  Finally, Fordyce tells him, “Up to now you’ve made all the threats.  I’ll make only one. If you harm my family I’ll kill you.”

Gore-Hepburn claims the entire operation will be over in 45 minutes.  Cash on Demand feels like it unfolds in real time.  I didn’t use a stopwatch, but if so, it’s one of the most effective movies I’ve seen in using the storytelling device.  It’s also based on a play (by Jacques Gilles), so some of the longer scenes are a little talky and stagey.  Overall, though, the characters move around enough in different parts of the bank so that suspense is generated.  For example, the strong room (vault) is downstairs and there are a series of locked doors and other security measures to disable between there and Fordyce’s office.

While most of the screen time is spent with Fordyce and Gore-Hepburn, Pearson (Richard Vernon) and Sanderson (Norman Bird) build a little suspense of their own.  They decide to call the insurance company to confirm their investigator’s visit.  First, due to a winter storm, they can’t get a connection to London.  Then, when London returns the call, they’re disconnected.  It’s all a race against time, not only for the good guys to foil the bad guy’s plans, but also to save Fordyce’s wife and son.  For me, it is the former that captivated me.  The latter isn’t as compelling based on Fordyce’s personality.

Then again, it is Peter Cushing who plays Fordyce.  After much time passes in the film, his tough veneer cracks as he scrambles to assist Gore-Hepburn when his plan begins unraveling.  Especially with the Christmas setting, Fordyce is like Scrooge and his moment of redemption comes late.  It’s a terrific performance from the Hammer veteran and a different one than normal.  The climax goes a little twisty and it wasn’t clear to me Fordyce’s fate.  Gore-Hepburn has taken everything into account, including a way to blame the bank manager for the attempted robbery should he get caught.

Cash on Demand was written and directed by people out of the regular repertoire of Hammer filmmakers: David T. Chantler & Lewis Greiver wrote it and Quentin Lawrence directed it.  (Only Chantler would work with the company again when he wrote She.)  This one was a pleasant surprise, as many of these Columbia Pictures thrillers have been.  I started watching it late in the evening and anticipated having to stop midway.  Instead, I was completely enthralled and entertained, playing it to the end.  I’m sorry I waited so long to watch it, but am grateful that I finally did.