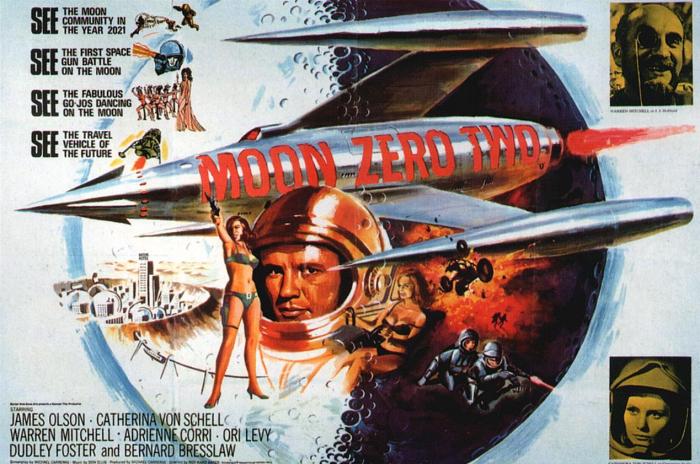 The animated moon becomes “real” while Kemp and his partner, Karminski (Ori Levy), salvage a piece of space junk to make a little cash down on Moon City, a colony with copper domes, monorail and a big, tent-like structure.  The Moon Express corporation needs passenger pilots and wants to hire Kemp, but he won’t work for anyone else unless it’s in order to explore space.  He was the first man on Mars and really, really wants to go to Mercury and the moons of Jupiter.

Subsequent to his jazzy landing, Kemp becomes involved in three disjointed adventures that poorly, yet obviously, tie together in the end.  First, he encounters Clem (Catherine Schell), a young woman searching for her brother who disappeared on the eve of the expiration date for the land he claimed to mine for two years.  He only encounters her at this point, though.  After his primary adventure (see below), he returns and agrees to take her to Farside Five and help locate him.

Second, he encounters Liz (Adrienne Corri), a policewoman (?) who, after sleeping with him, gives him a week to either give his ship (Moon 02) a major overhaul or be grounded.  Apparently, his craft is no longer safe and if he were to be grounded, he would lose the opportunity to fly for anyone, whether for scientific or commercial purposes.  Liz is sort of on his tail throughout the movie, acting suspicious of his actions and sometimes cleaning up his messes.

Finally, in what you might assume is the primary adventure, although it’s split into two parts, millionaire J.J. Hubbard (Warren Mitchell), hires Kemp and Karminsky to land an asteroid on the moon.  It’s not an ordinary asteroid, though, it’s “6,000 tons of gemstone sapphire.”  They intend to attach engines to it and, over the course of two excursions into space, send it to the surface of the moon.  Since any jewel becomes less valuable in bulk, Hubbard is going to use it to line rocket tubes and build bigger rockets.

Kemp takes Clem to Farside Five after the first excursion.  They have only three days before the second excursion, and it turns out they conclude their journey one hour before takeoff.  I love it when the timing turns out so well, especially when so much happens to them in between!  They find a skeleton in her brother’s moon suit, have a shootout with the bad guys at his mining site, and almost overheat on the long journey back in their off road “bug” vehicle.

Liz (the sheriff) and Hubbard (the villain) are waiting for them so there can be another shootout.  If you think my words are painting images of cowboys and the wild frontier, Moon Zero Two was actually billed as “the first moon Western.”  (11 years later, Warner Bros. would give us “High Noon in space” with Outland, starring Sean Connery.)  It simply amazes me that they still use regular six-shooters in 2021 and have no issues with bullets simply floating off into space (or causing something to explode).

That’s because the technology in Moon Zero Two is a little wacky.  During a fight in the Moon Bar, Kemp turns down the artificial gravity, which doesn’t so much cause people to float as it does cause them to move in slow motion.  Otherwise, the special effects aren’t bad.  The astronauts float convincingly in black space and the Moon 02 ship looks authentic.  The dancers in the bar are another kind of special effect altogether, one that cements the movie’s position firmly in camp.

Moon Zero Two drips of the 60s.  It’s from the same era as 2001: A Space Odyssey and Planet of the Apes, yet Hammer gave us this!  It’s forgivable because the studio also gave us Quatermass & the Pit two years earlier and not all sci-fi movies at the end of the decade were Oscar-caliber (The Green Slime, anyone?)  I’ve never seen Barbarella, but I have the impression it would make a great double feature with Moon Zero Two.  (Instead, the latter was shown with When Dinosaurs Ruled the Earth.)

The movie is now horribly dated with its attitude toward women and sex.  When Kemp first sees the asteroid, he says, “How’d you like to meet the broad who could hang that around her neck?”  When getting too warm in their bug, Kemp and Clem must, of course, remove their clothes.  And the final lines of the movie are an exchange between the two potential lovebirds: Kemp asks, “What’s your room at the hotel like?” and Clem replies, “Why don’t you find out?”

Once I surrendered the notion of taking any of this seriously, I appreciated some of the light cosmetic touches.  The computer that Hubbard carries is obviously an electric calculator in an oversized briefcase.  The patent leather moon suits come in different colors so people can be identified.  (Clem, of course, has one that’s a lovely lavender, but I liked the yellow one myself.)   And the hats and headpieces worn by the woman are simultaneously simple, yet elegant.

I recently referred to a movie that was bad, but not bad enough to be good.  Moon Zero Two is bad enough to be good.  When it concludes with Hubbard and his henchman attached to the asteroid hurtling toward the moon and the hero says, “Well, he made his mark on the moon, all right,” you know you’ve just watched something very, very special.  Yeah, you have to hate it a lot, but it’s perfectly acceptable to love it just a little.