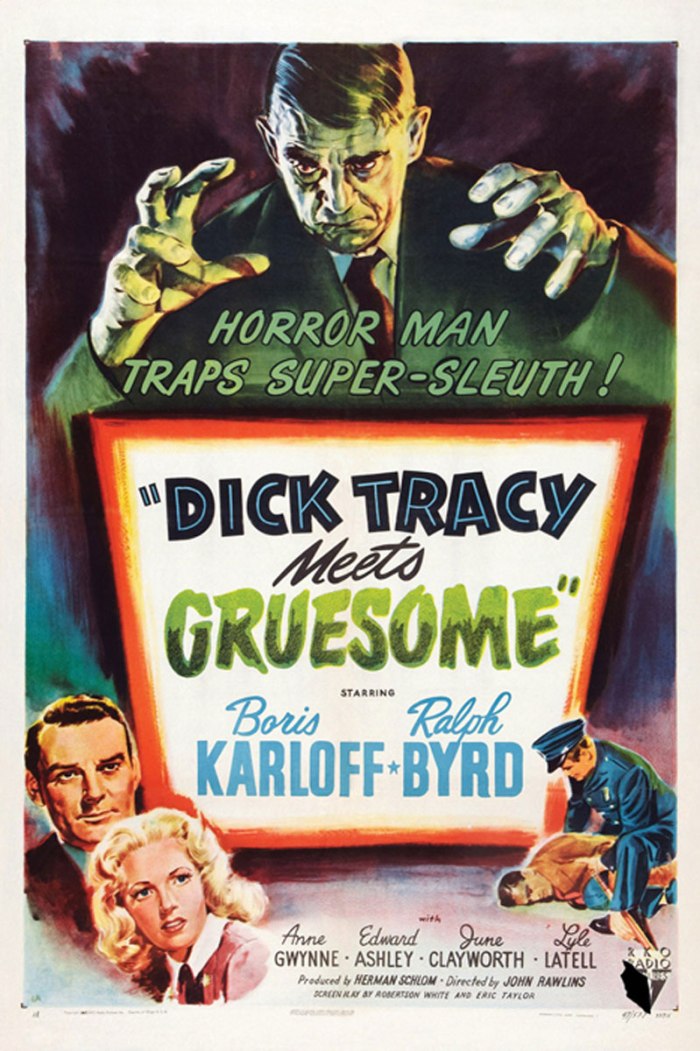 Some of today’s non-superhero comic book movies could learn a lesson from Dick Tracy Meets Gruesome, a movie made almost 70 years ago.  It’s fast, it’s fun, it’s funny.  The fourth film in a series featuring the character created by (and written by, from 1931 to 1977) Chester Gould, stars Ralph Byrd as the famous detective.  Byrd originated the character on screen in four serials, then played him in two of the four movies and a short-lived television series that ended with his premature death in 1952.

Boris Karloff is the headliner, here, though, and even has top billing.  While the Dick Tracy comic has included many iconic villains over the years, Gruesome was created for the movie.  In fact, he didn’t appear in the comic strip until October, 2014, in a story written by Mike Curtis and drawn by Joe Staton.  The actor relies mostly on his own looks whereas villains like Flattop and Pruneface have visages that match their monikers.

Dick Tracy Meets Gruesome is shot like, and has many features of, a typical film-noir outing.  Its mixed tone, though, is distinguished in its opening shot as the camera pans across two hanging nooses and ominous music plays.  When the camera lands on a sign for the establishment, Hangman’s Knot, the mood lightens.  Inside, Gruesome announces he’s been released from prison for good behavior, but immediately asks Melody (Tony Barrett), the piano player, in which new job he can participate.

At Wood Plastics, Inc., Gruesome inhales an experimental nerve gas and becomes paralyzed.  Believed to be dead, he’s taken to the morgue where, when he later wakes up in a drawer, Dick Tracy becomes involved in the mystery.  “I tell you, if I didn’t know better I’d swear we were doing business with Boris Karloff,” says Pat Patton, Tracy’s partner.  Meanwhile, Gruesome/Karloff fills canisters with the gas which he uses to “freeze” everyone at a bank so he can rob it.

This is fun stuff, and most of the movie continues in this manner until it devolves into a standard car chase and shootout.  It recovers at the end, though, with the fairly clever and suspenseful apprehension of the bad guy.  Then, in a humorous coda, we get a taste of the chemistry both onscreen and off that made Dick Tracy the character, and Dick Tracy the film series, so popular in their day.  At just over an hour, I thoroughly enjoyed every minute of it.  I’d like to see some of the others, even the ones without Karloff.