From time to time, Classic Horrors will feature movies released after 1978 when they have a direct connection to those released before 1978.  Beginning in May, 2010, until it expanded its content to include more than just the horror genre as Boom Howdy.com, I wrote a column for Downright Creepy.com called “Remake Rewind.”  With permission of Boom Howdy, we present an original post under the “Remake Rewind” banner… 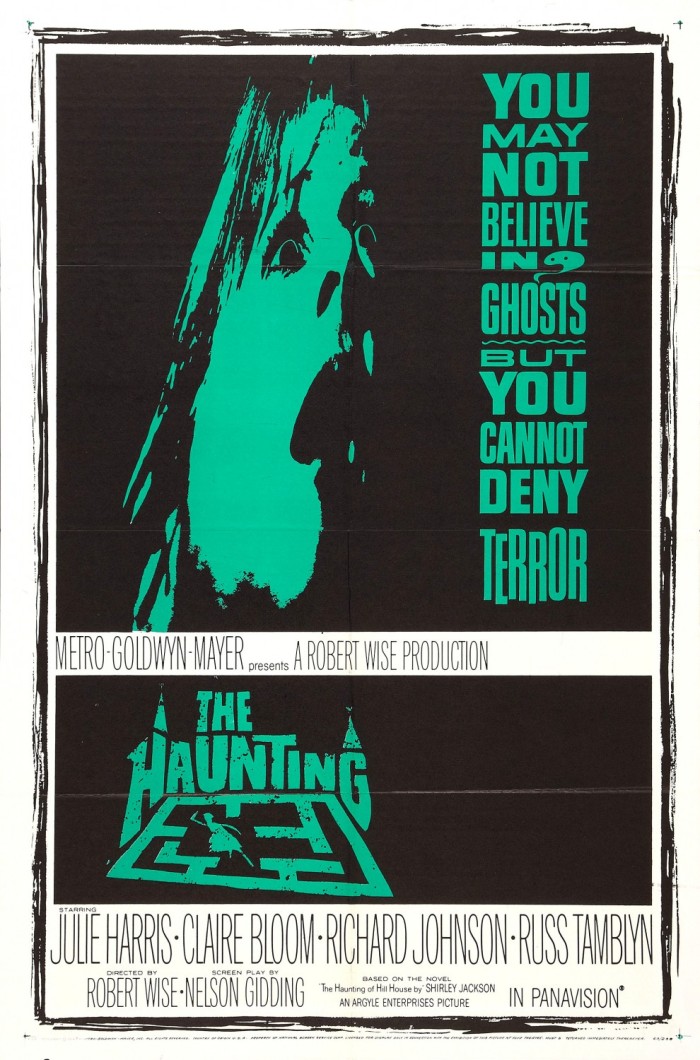 From the opening shots of both The Haunting (1963) and its bloated 1999 remake of the same name, a difference in focus is clear.  The black and white original begins with a lingering shot of Hill House and narrated flashbacks tell us its 90-year history.  The color remake begins with a quick shot of the sunrise over the top of Hill House and then settles inside the apartment where Eleanor Vance (Lily Taylor) took care of her dying mother for 11 years.  The focus in the first movie is the house.  The focus in the second movie is the woman.

They’re both haunted house movies, but one leaves the action and the story to our imagination, creating unseen ghosts from shadows, while one leaves nothing to the imagination, creating physical ghosts from CGI.  The mystery in the original comes not from the house (we know up front what it is and why it is), but from its guest.  The mystery in the remake comes not from its guests (we know up front who Eleanor is and why she’s there), but from the house itself.  Which version you prefer may depend on which point of view is more frightening for you.

Or, it may just depend on whether you’re scared by the subtlety of the original or the indulgence of the sequel.  One makes you think, the other requires no thought whatsoever.  Do you want your scares spoon fed to you?  In case it’s not clear, I prefer the original The Haunting.  However, the remake is not quite I as awful as I remembered and the original is not quite as good as I remembered.  Tastes change, but recently watching them both back-to-back, I understand better the construction of the remake and I question more the motivations in the original.

Hugh Crain (Charles Gunning or Howard Lang) built Hill House with his fortune 90 or 130 years ago.  In the original movie, the house is evil from the beginning.  A series of mysterious deaths and suicides occurred through the years. In the remake, the house became evil when Crain abducted children from his textile mill and forced his wife to bury their bones in the trap door of the fireplace with the ashes.  In both movies, the house currently sits empty except for its daytime-only caretakers, Mr. & Mrs. Dudley (Valentine Dyall and Rosalie Crutchley or Bruce Dern and Marian Seldes).

Even more significant a difference between the stories is its purpose for bringing people to Hill House.  In the original, Dr. John Markway (Richard Johnson) has been looking for a real haunted house to prove the supernatural exists.  In the remake, Dr. David Marrow (Liam Neeson) simply wants a scary place to study fear in insomniacs.  Markway wants people with a history of psychic phenomena to attract spirits in the house.  Marrow wants suggestible subjects so that “experimental haunting fiction” will unknowingly manifest within the group.  Both may be unethical, but at least Markway is forthcoming with his team.

Interestingly, with such different approaches, the two movies share a theory about fear.  Marrow believes it is a primordial response we carry with us, but over time has become useless.  Markway believes no ghost has ever harmed a human being; it is the fear of the supernatural that causes harm.  In either case, the doctors would just as soon eliminate fear.  The science goes out the door pretty quickly, though, when strange occurrences begin inside the house.  While they are legitimate theories, they’re really just designed to get people together at Hill House in the first place.

As mentioned, I understand the construction of the remake.  A decision was made to turn the story into a mystery about Hill House.  Over the 113-minute running time of The Haunting (1999), we learn the history of it and how it’s connected directly to Eleanor Vance.  A decision was also made to deliver all the answers by the end so there is no ambiguity remaining.  It’s a very modern, summer blockbuster approach to filmmaking.  Too much is never enough.  I’m certain director Jan de Bont (Speed, Twister) delivered what he was hired to deliver.

What annoys me now about The Haunting (1963) is the character of Eleanor Lance (Julie Harris).  Throughout its 112-minute running time, we are privy to her inner dialogue.  It’s exhausting. Her mind constantly races, “At last I’m going somewhere I’m expected… Someday I’ll have my own… I wonder if all homeless people feel this way…” On the other hand, it’s also unsettling and a device to assist the audience in questioning everything just as she is.  There’s plenty of ambiguity.  Director Robert Wise (The Day the Earth Stood Still) delivers what could really be just an intense psychological thriller.

With the supernatural vs. psychological intent of Dr. Markway vs. Dr. Marrow, the other guests who stay at Hill House are slightly different.  Besides him and Eleanor, the 1963 version has Theodora (Claire Bloom), a psychic, and Luke Sanderson (Russ Tamblyn), the skeptical relative who’s next in line to inherit the estate.  The 1999 version has Theo (Catheine Zeta-Jones), a possibly lesbian jet setter and Luke Sanderson (Owen Wilson), who is not related in any way to the house.  He’s simply another participant in Marrow’s experiment.

In the 1963 version, Dr. Markway’s wife, Grace (Lois Maxwell) visits to provide some much-needed comic relief.  When she opens the nursery door, she comments, “Now I know who your fiend is: the interior decorator.”  She’s also someone who can later disappear and send The Haunting spinning toward its suspenseful conclusion.  It’s a conclusion in which, except for the very end, nobody dies.  The same can’t be said for the remake.  By the time is spirals towards its conclusion, one of the “core four” has been decapitated by a swinging chimney flu.

Both movies feature a set piece in which Eleanor climbs an iron spiral staircase that’s about to collapse.  In the original, it’s located in the library (where Eleanor doesn’t even like to go because of the smell) and in the remake, it’s located in the greenhouse.  In the original, the bolts at the top of the staircase are loose and pull further out of the wall with each step she takes.  In the remake, malevolent forces unscrew the bolts.  Both are suspenseful, I suppose, but when you consider the placement of the staircase within the context of the rest of the movie, I prefer the original to the remake.

In The Haunting (1999), nobody joins them at Hill House late in the movie.  However, two assistants join Dr. Marrow early in the movie.  When a broken harpsichord string nearly causes one of them, Mary (Alix Koromzay) to lose an eye, she and Todd (Todd Field) leave, promising to return as soon as they can.  We neither see nor hear from them again.  What was their purpose in the story?  Mr. Dudley’s appearance is also squandered.  In the original, he was a “crazy old man at the gas station” character who frightened Eleanor when she arrived.  In the remake, he simply opens the gate for her. 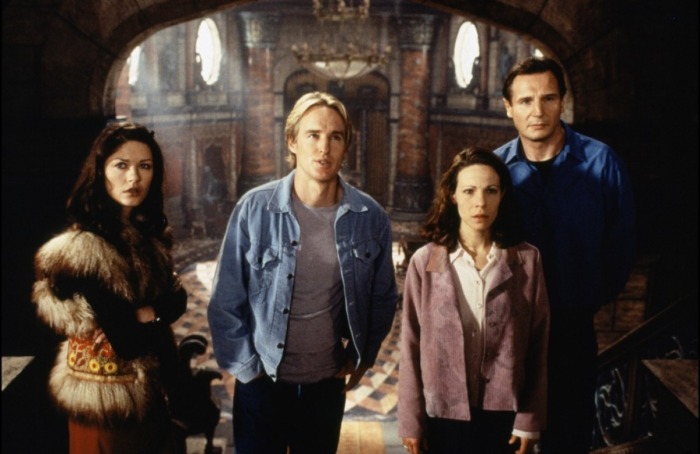 There’s a sense of wonder in the original version of the movie.  Dr. Markway says when they enter Hill House, they’ll find “Either a few loose floorboards or the key to another world.”  That’s an important distinction to make, representing another type of connection to the house.  Dr. Marrow has no such connection; it’s just a big laboratory for him.  It also makes a difference that Markway is not the skeptic that Marrow is.  Markway knows something supernatural’s happening, yet keeps everyone there.  Marrow doesn’t believe anything’s happening, so keeps everyone there.  Which one is the more dangerous man?

Finally, let’s talk a little about Hill House itself.  Both interpretations offer giant, sprawling mansions.  In the 1963 version, Crain built every piece of the house slightly off kilter.  In the 1999 version Crain continued to add rooms on the house until it became a Frankenstein monster of architecture.  From the outside, both look… off.  On the inside, the 1963 version establishes atmosphere with dark shadows, mirrors and texture.  The 1999 version establishes atmosphere with gross excess.  Each room is a marvel, from a giant carousel floor to a flowing stream, and any inanimate object can come to life.

Technically, I don’t suppose The Haunting (1999) is a remake of The Haunting (1963).  Instead, both are adaptations of Shirley Jackson’s 1959 novel which The Wall Street Journal claims is “now widely regarded as the greatest haunted-house story ever written.”  The scenes in both movies that are strikingly similar must be attributed to the source material rather than to the screenplays by either Nelson Gidding (1963) or David Self (1999).  There’s no credit in the latter for material from the former.  For all intents and purposes, though, I imagine most people consider the second movie to be a remake of the first

The original The Haunting is a complex movie.  I haven’t begun to do it justice and could write three times as much about it as I’ve written here about both movies.  I’m simply identifying some of the similarities and differences between the two.  Ultimately, it culminates with how I felt at the end of each movie.  After The Haunting (1963), I felt uneasy and a little confused.  After The Haunting (1999), I felt frustrated and a little bored.  Imagination will always enhance a ghost story.  For that reason, I like the one where my mind thinks it knows what happened, instead of the one where it’s told what happened.