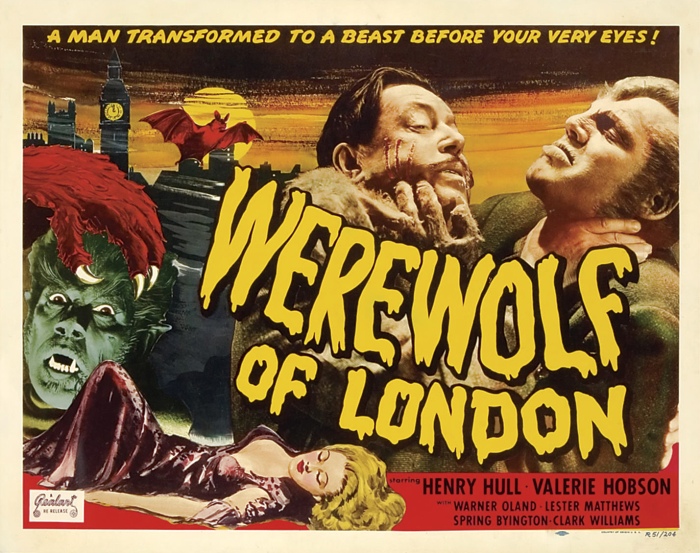 It’s no wonder 1935’s Werewolf of London didn’t kick off a franchise similar to Universal’s Dracula, Frankenstein, Mummy or Invisible Man. It’s an odd version of the familiar werewolf story with elements of which I’m not aware of appearing in any other subsequent movies.

Specifically, the story revolves around… botany. The flower isn’t wolfbane that blooms when the autumn moon is bright; it’s something called “mariphasa” that produces an antidote for “werewolfery.”  Yeah, I’ve never heard the term “werewolfery” in any other movie, either.

Dr. Glendon (Henry Hull) is the botanist who brings home the flower after a trip to Tibet, a trip where he happens to be bitten by a werewolf. There are some interesting touches in the movie, such as when his bloody arm phases to a scarred arm to indicate a passage of time and his return to London.

Directed by Stuart Walker, whose career spanned 12 movies in only four years, Werewolf of London unfolds at an even pace for most of its 75-minute running time. However, near the finale, it speeds up with one of the earliest examples I know of the fast intercutting of short scenes with different people talking on the telephone.

Dr. Yogami (Warner Oland) follows Glendon home from Tibet in pursuit of the flower. There’s an interesting plot twist late in the movie, even if you figure it out much earlier than it’s revealed.  With the familiar pattern of Universal horror movies, there is not only a love triangle, but also another villain to make the monster more sympathetic.

Early during his return, Glendon neglects his wife, Lisa (Valerie Hobson), telling her that as soon as he finishes his experiment he’ll be more human. Little does he know that as the mariphasa buds bloom, hair begins to grow on his hands.  Luckily, he can poke the flower to make it stop.

It becomes more difficult for him later, though, when the flower is stolen by Yogami and he “instinctively seeks to kill the thing it loves best,” Lisa. He must kill one human being each night of the full moon or remain forever afflicted.  Hence, there begins a series of “mysterious Goose Lane murders.”  When given the likely explanation, an inspector says, “This is Scotland Yard, not Grimm’s Fairy Tales.”

Glendon’s transformations are creatively filmed. As he walks through a set, each time he emerges from behind an obstacle, he’s advanced a little further.  His werewolf, though, is more man than wolf, walking upright and even putting on clothes rather than ripping out of them.  However, it is described as, “Neither man nor wolf, but a satanic creature with the worst of both.”

Growing up, I remember seeing pictures from Werewolf of London in Famous Monsters and books about classic horror movies. Hull always looked so good made up as the werewolf.  The moving image of him, though, does not quite live up to those pictures (and those memories).  This is one of the reasons the movie is a little disappointing and is not one of my favorites.